This is the story of that man, who dedicated his whole life to one mission. This mission is not a war, but it was not less than a war. His passion, aggregation, calamity and furor made him the only one out of 1.2 billon Indians. Yes, he is Dashrath Manjhi, who lived in a village area in Gaya, his wife needs medical care but hospital is 70 km away from his house and crossing mountain is the only way to reach hospital. It was 1959, when his wife died, but he did not sat down in grief. He stood up and single-handedly cutted out 360 feet long, 30 feet high and 30 feet wide hill near Gahlaur, Gaya, Bihar. He worked day and night, and after 22 years Manjhi written his name in history.

Known as The man who moved a mountain, completes his mission so that other needy people could reach civilization (including a doctor) in time. The government rewarded his efforts with a plot of land, Manjhi donated the land back for a hospital. Because his dream was to have a road, a school, and a hospital in his area. He died in 2007 after a battle with cancer. 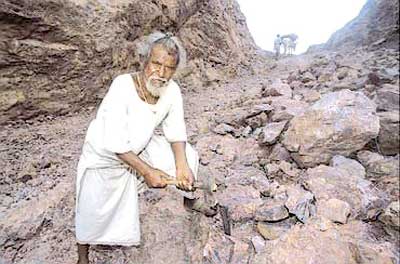 This man who made the impossible possible with his hard work and dedication also got lot of commercial publicity in TV and Cinema. His son and daughter-in-law Bhagirath and Basanti both were come in Aamir Khan’s TV show Satyamev
Jayate for showing the world Mountain Man’s story. Even Aamir Khan visited their village Dashrath nagar Dalit tola near Gahlaur in Gaya district, about 100 km from state capital Patna. But the sad part is Dashrath Manjhi , who gave this whole life to this social cause, his son and daughter-in-law both are disabled and living in abject poverty.

Soon Dashrath Manjhi biopic based movie Manjhi: The Mountain Man would hit the theater on 21 august. And the lead role as Manjhi is played by Legendary actor Nawazuddin Siddiqui .